This task falls under the category of pond work even though there was no pond to work on. Instead we were both clearing an area to create a pond and building a hibernaculum. A hibernaculum is a structure in which amphibians can safely hibernate. The word comes from the Latin phrase meaning a winter camp, originally used by Roman soldiers but now the word has been re-purposed for conservation.

This particular hibernaculum is made from a linear habitat pile made from brash with logs at either end. Ultimately the structure will be covered in yew branches (removed from a nearby hedge where it was causing problems), and finally covered in the soil that will be dug out to create the ponds.

29/11/20 – Today’s work involved our chainsaw operator cutting down some big old willow trees before the rest of the volunteers arrived. By mid-morning our chainsaw guy had finished work and left, leaving the site open for the safe six to come in and begin their work. This was mostly cutting up the brash for the habitat pile and stacking the logs for the hibernaculum’s entrance structure. The gaps between the logs will let the amphibians in but keep everything else out.

27/12/20 – Another team returned today to finish off moving the pile of brash and covering the the structure in yew branches. The structure had been widened a little to accommodate the remaining brash, well done Clayton.

10/04/21 – Finally, after several months, we were able to get a digger on to the site to dig out the figure 8 ponds and cover the hibernaculum with a layer of soil. This will both protect the amphibians from disturbance during hibernation and also protect the hibernaculum from vandals. So, job done. Photo of the the completed work supplied by Richard Marshall, the hibernaculum can be seen in the the final photo just next to the trees.

05/05/21 – After a week of heavy rain the two ponds had started to fill up with water, although Richard Marshall, the site’s warden noticed the levels started to drop by the next day. The hibernaculum itself is still being attached by vandals with several attempts being made to burn it. 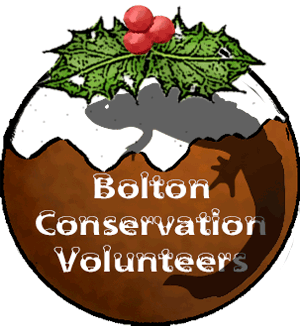